The Open Lighting Project has moved!

We've launched our new site at www.openlighting.org. This wiki will remain and be updated with more technical information.

OLA on Windows with VMWare

Jump to: navigation, search
This page has migrated

This page has migrated to our new site, please see https://www.openlighting.org/ola/tutorials/ola-on-windows-via-vmware/.

This content will not be updated and is just left here for reference and will be removed at some point in the future, see the link above for the most up-to-date version.

This explains how to run OLA on a Windows system using VMWare. This uses virtualization so it's not recommended for real time lighting control. However it's useful if you want to experiment with OLA and perform tasks that aren't time sensitive like Running RDM Responder Tests

Warning: There have been reports of the VMWare Player USB Stack dropping frames, which causing problems with the RDM Responder tests. The recommended way of running the tests is to use the Raspberry Pi.

Setting up the Linux System

This tutorial is based on these excellent instructions. The instructions are for Windows 7, but works fine on XP as well.

Download the free VMWare Player. You'll need to complete the survey and provide an email address. Install this on your windows machine. Reboot.

I recommend Ubuntu. It's fairly easy to use and stays up to date. Get the latest version from here. Once this is done you should have an .iso file which will be around 600MB.

On the next screen setup a username & password. You can then control where the VM image is stored and the size of the image. The defaults are fine.

Click Finish to setup the Linux image. Installation of Ubuntu then begins.

You'll be asked if you want to install VMWare tool for Linux. Say yes as we'll use them later. The download will continue along with the install. This stage can take quite a while.

Once complete, you'll be presented with a graphical login screen showing the username that you setup before. Login to the system and you'll be shown the desktop.

Next enter Unity mode. This seamlessly merges the Linux windows with the Windows desktop. You can also copy and paste between Windows and Linux at this point. 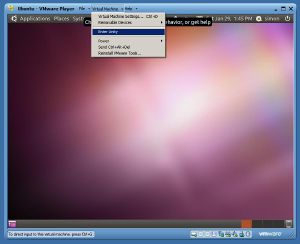 Finally open the Linux terminal application as shown below. You'll need to move your mouse to the Start button for the Unity menu to appear. 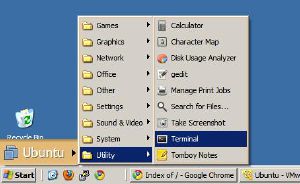 Now we'll confirm that the network is working. Type:

You should see responses like what's below. Hit Control-C to exit the ping program. 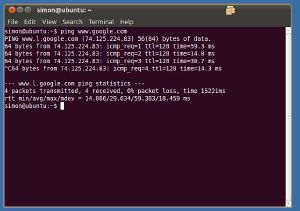 At this point we have a working Linux system. Time to install OLA

Run the following to clone the OLA code:

At this stage you can start OLA by running

The -l flag controls the logging level from 0 (log nothing) to 4 (debug logs). 3 is log level info, which is usually enough for most people.

Now find the IP address of your Linux instance:

Look for a line that starts with inet addr:. 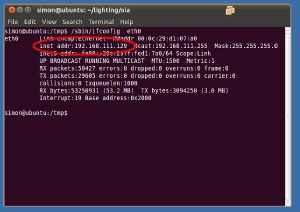 Open up a browser on the Windows PC and type in the IP address followed by :9090. This will bring up the OLA web console. 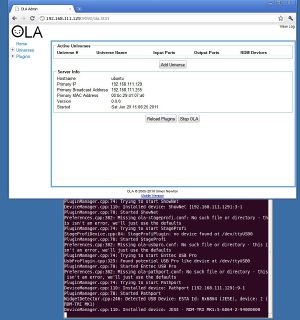 When using OLA with VMWare you need to make sure that any DMX USB devices are correctly bound to the guest OS (Linux).

http://www.vmware.com/support/ws45/doc/devices_usb_ws.html describes how to set this up.

From time to time you may want to update the code. From within the existing ola directory run:

Not all of these steps are required each time, but unless you have a good idea of what changed it's easier just to run everything.